All about GSTR-3B Filing for July and August:

The GST Council has relaxed filing rules for the first two months post implementation. Here’s how to file your returns for these months using form GSTR-3B.

The recently concluded meeting of the GST Council on June 18th brought some good news to business owners. The Council has agreed to relax the return filing requirement for the first two months under the new GST regime. As per the provisions of GST law, a normal taxpayer is required to file GSTR-1 by the 10th of the next month. Similarly, GSTR-2 and GSTR-3 are required to be furnished by the 15th and 20th of the next month respectively.

However, in order to address the concerns of small taxpayers who are still maintaining manual records, the GST Council has now proposed a relaxation in return filing for the month of July and August. September onwards, every taxpayer has to strictly follow the regular provisions of filing return on 10th, 15th and 20th of next month i.e. October. Also, there will be no late fee or penalty levied for the initial two months. 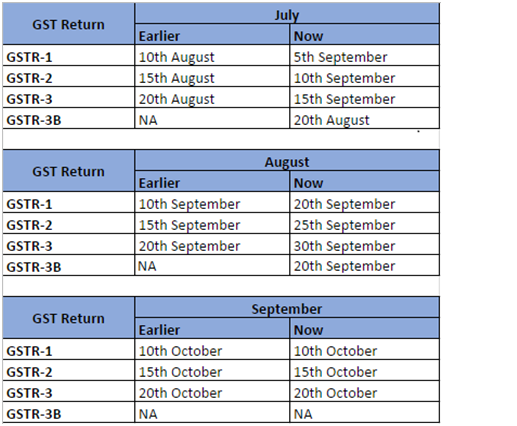 As per the revised rules, a new form GSTR-3B will be introduced by the government. Every taxpayer needs to file his return on self-assessment basis for the first two months i.e July and August. These return forms have to be filed by 20th of next month.

Simultaneously, the taxpayer has to file the GSTR-1 for the month of July on or before September 5; an extension of 25 days has been extended for the month of July. For the month of August, this extension is limited to a period of 10 days. Once GSTR-1 is filed, GSTR-2 and GSTR-3 will auto-populate with information furnished under GSTR-1. Eventually, this GSTR-3 will be matched against GSTR-3B and any difference will be refunded or needs to be paid as the case may be. However, no penalty or late fees will be charged on the difference.

Simplified summary return (GSTR 3B) for the first 2 Months:

For the first two months of GST implementation, the tax would be payable based on a simple return (Form GSTR-3B) containing summary of outward and inward supplies which will be submitted before 20th of the succeeding month. It means, all the supplies need to file up anyway as expected, but the things are bit simpler. But don’t get relaxed, you need to record each & every transaction for future disclosure.

No late fees and penalty would be levied for the interim period:

With the objective of ensuring smooth rollout of GST and taking into account the concerns expressed by the trade and industry, Govt. of India decided to not to levy any ate fees and penalty for the interim period. His is intended to provide a sense of comfort to the taxpayers and give them an elbow room to attune themselves with the requirements of the changed system. This not only underlines the government’s commitment towards ensuring that all the stakeholders are on board but also provides an opportunity to the taxpayers to be ready for this historic reform.

Though GOI is providing some relaxation to file simplified summary return in GSTR 3B for the initial 2 months, but beware! GSTR 1 of the initial two months still needs to be filed, and that too after two months into GST regime where you may start facing new issues! Also during September you need to prepare the data for filling return which will be due in Oct. So please don’t get relaxed by getting the news of simplified return, rather it is recommended to take extra cautions in the initial period