The Right of Persons with Disability Bill, 2014 was passed and was replaced with the Person with Disabilities Act, 1995. The bill was pending in the Rajya Sabha from past couple of years. It was later modified and amendments were made as per the recommendations of the Sudha Kaul Committee. As per the census conducted in 2011, number of disabled in India are around 2.68 crore or 2.21% of the population. Under the bill, large number of people will have the right and eligible for the entitlement as increased number of conditions are included in the bill compared to 1995 Act. The bill is in line with the UN Convention on Rights of Person with Disabilities.

The replaced bill is now covering 19 conditions compared to seven conditions covered in the Act previously. Act 1995 recognized blindness, leprosy-cured, low visions, locomotor disability, mental retardation, leprosy -cured and mental illness. However, new conditions covered under the amended bill include haemophilia, autism, cerebral palsy, thalassaemia and multiple sclerosis among others. Two other disabilities which are caused due acid attacks and Parkinson are also covered under the bill. The bill contains the provision which says that Government can include any other condition under the disability. 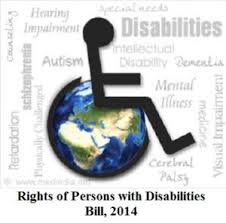 The Bill states that Individuals who have at least 40% of the disability will get benefits such as reservations in education as well as employment, priority in government schemes. Back in 1995, the Act called for 3% reservation for the disabled in higher education institutions. In 2014, this percentage has been increased from 3% to 5%, adding 1% for mental illness and multiple disabilities.

Under the new bill, those with different ability are entitled to several rights and entitlements such as friendly access to all public buildings. The term establishments will cover the private firms instead of previously government bodies only. All the establishments, including private as well as public will have to provide barrier-free access to the person with different abilities. These individuals have right to access the buildings, public infrastructure and all king of transportation. Further, no employer can discriminate them in terms of employment.

The Right of Persons with Disability Bill has mentioned the provisions related to guardianship of mentally ill person. The bill states that District courts will be able to award two types of guardianship. Limited guardian will take the joint decisions with the mentally ill person whereas the plenary guardian will be able to take the decision on behalf of mentally unfit person without having to consult them.

This is one of the most significant additions made in the new Right of Persons with Disability Bill, 2014. The Penalty will be charged on violating the rule of the Act. In the disability act 1995, there was no penal provision. In the Right of Persons with Disability Bill 2014 Act, violation of any of the provisions will attract the Jail term of up to 6 months and/or a fine of Rs 10,000. On subsequent violation jail term of up to 2 years and fine of Rs 50,000 to Rs 5 Lakh is mentioned in the act. The amendment to the bill has however proposed to eliminate the jail term entirely and continue with the fines for violation of laws.