Government has announced Lucky Grahak Yojna and Digi Dhan Vyapar Yojana which will be launched on December 25th in a bid to bring poor, lower middle class and small businesses under the ambit of digital payment. Government has announced daily, weekly and mega prizes worth Rs 340 crores for consumers as well as merchants on small digital payments. Under the scheme, transactions ranging from Rs 50 to Rs 3000 will be taken in order to cater to the every section of the society.

In the first phase, the approximate expenditure will be around Rs 340 crores and there will be string of other measures taken in the time to. This exercise is solely done to push the economy to go cashless.National Payments Corporation of India(NCPI) will monitor both the schemes. Same authority will also be responsible for conducting technical audit of schemes at back end operations. 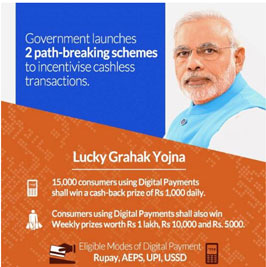 Lucky Grahak Yojna- Under this scheme, government has announced daily reward of Rs 1,000 each through cashback to 15,000 lucky winners for 100 days from December 25th till April 13th. On weekly basis, there will be prices of Rs 1 lakhs, Rs 10,000 and Rs 5,000 for consumers who are using digital payment mode.

Digi- Dhan Vyapar Yojna – This is a merchant scheme under which weekly prices will be worth Rs 50,000 and Rs 2,500 to be announced during the period.There will be 7,000 weekly awards each for consumers and merchants.

Government has decided to end the scheme on the B R Ambedkar’s birth anniversary on April 14th with the announcement of mega prize of Rs 1 crore, Rs 50 lakh and Rs 25 lakhs for those who have done transactions digitally between November 8th to April 13. For merchants also, mega prize will be Rs 50 lakhs, Rs 25 lakhs and Rs 12 lakhs.

Government stated that only 5% of the personal transaction in India is done digitally and rest 95% is done in cash which created parallel economy. Those individuals who are doing transactions only through UPI, USSD, AAdhaar Enabled Payment System(AEPS) and RuPay cards will be eligible for lucky draws. Those transactions done by private cards , credit cards and e-wallets of private companies.

Aim of the scheme- To encourage digital transactions, specifically in rural areas