The Benami Transactions (Prohibition) Amendment Act has come into effect and there have been some new provision added to curb the deposit of black money in others account to make it white. A Benami Transaction under the act is defined as a transaction which is a property is held by or transferred to a person, but has been provided or paid by another person.

Under the act, an individual cannot re-transfer the Benami to the actual owner. If any such transfer happens, it will be treated as null and void. There will be no action taken if the Benami property has been declared as part of the Income under Income Disclosure Scheme of 2016.

i) a transaction been made under a fictitious name

iii) the person providing the property is not traceable.

The act states that there are certain transactions that are exempted under the Benami Transactions (Prohibition) Amendment Act 2016. These transactions could be any one of the following

b) property held by a person in a fiduciary capacity for another person, for example, a trustee, executor, partner, director of a company or a depository.

c) Contract for transfer of property which has been executed partly under the Transfer of Property Act, 1882.

Money for the transaction should have come from the known sources if the property is owned by karta of a Hindu Undivided Family, spouse, parents and siblings. it is important to understand that the term property is not just limited to Real estate but covers all sorts of tangible or intangible, movable or immovable and corporeal or incorporeal property. 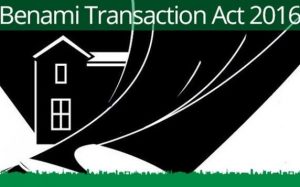 The Income Tax Department has declared that it will impose penalty of 7 years imprisonment for an individual who will deposit money in others account during the 50 day window period. Further, the department is also looking to impose charges on the individuals under the Banami Act Transaction Act against someone who violates banks. The action could include penalty, prosecution and jail term of maximum seven years.

The amount deposited as the Benami amount in the bank account post demonetization will be taken into control and the accused will also bear the fine which could be up to 25% of the fair market value of the Benami property.