Individuals holding Aadhaar Card will soon be able to use their cards to debit or credit money. Ajay Bhushan, CEO of Unique Identification Authority of India(UIDAI) said that the move  will be taken to support the cashless economy appeal of the government. In order to avail the service, the Aadhar card holders will enter their Aadhaar ID number and thereafter fingerprint of iris identification will be done for electronic transaction. Further the bio metric capacity of Aadhaar will be enhanced from the current 10 crore to 40 crore a day. 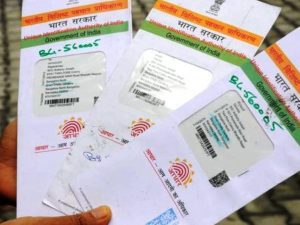 The authority will take utmost are in concealing the private details for all Aadhaar related transactions. Aadhaar Card will be linked with the Bank accounts  and the Aadhaar -Enabled Payment System (AEPS) will be used for the fund transfer, balance enquiry, cash debits , credits and so on. Further, CEO of NITI Aayog, Amitabh Kant stated that the Android mobile app will be launched soon to encourage the cashless transaction for Aadhaar cardholders. the Mobile app will go live in next 15 days and thereafter cell phones that have in-built retina and fingerprint scanners can be used for the transactions. Those companies who are manufacturing cell-phones in India will be asked to include in-built retina and  fingerprint scanner in their mobile phones.

Government is also prepping to bring four other options for cashless transactions:

According to Kant, the government is also working on offering incentives for cashless transactions and discouraging cash transactions. The government has reportedly allocated Rs 100 crore to provide incentives to the merchants who enrol on the digital platform and embrace cashless mode of payment. with the Aadhaar card, the transaction can take place between two individuals who have bank account linked with the Aadhaar. All they need to do is, feed the 12-digit unique identification number in the mobile set. Andhra Pradesh government is already using Aadhaar enables system in fair price shops and these transactions are card-less s well as Pinless. After, acknowledging that Aadhaar Card can be used as for online transactions, there has been rise in the number of enrollments. The enrollments have surged to 7 lakhs per day from 4-5 lakhs previously.

However, amid all these developments, UIDAI is also urging the card holders to use their Aadhaar Cards carefully. In a series of tweets at its Twitter handle, UIDAI said that do not share the printed copy or photocopy of Aadhaar with anyone. Further, if an Individual is going in the bank to deposit or withdraw money and asked for Aadhaar Card, then it should by duly self attested and the purpose should be stated clearly. With Aadhaar Card becoming a mode of transaction, it will be more crucial to make sure that it is used discreetly to minimise the chance of any misuse by anyone. UIDAI wants all the card holders and those who have enrolled for it to be aware of the consequences if the Aadhaar is misused.