Now it’s a time which may be joint united effort of all !!!! Now If you find any auto driver denying the destination , asking for more than metered fare here is the compalint cell…

Got a problem with Auto ? Call 080-25588444 and 080-25588555.
They will take down every complaint by citizens, be it day or night, and act on them. To make this possible, they will start two 24-hour, seven days a week helplines to take complaints. If no operator is available, the call will be recorded in a voice mail. This will be in addition to the one number already operational (10 am to 6 pm). Plus, they will be distributing self-addressed post-cards. Citizens can write down their complaint and drop the card in any post box. 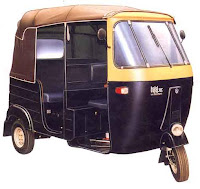 Both systems will be operational soon. The police promise to take action on the complaints/feedback they receive. The two complaints — refusing to ply and meter tampering — against auto-drivers are not new, but it is only now that police have decided to crack the whip.
Among other things, they took note of an online initiative by citizens to boycott autos in a bid to get the message across. Auto drivers shrugged it off as no big deal, but the traffic police are not taking it lightly.
Additional Police Commissioner Praveen Sood said, “We took the decision on the helplines and post cards after the public protested against auto-drivers. The cards will be made available in malls, theatres, bus and railway stations. Our Traffic management Centre already receives a minimum of 30 complaints every day against auto-drivers. The aim is to make it easier for citizens to lodge complaints and get a solution as soon as possible. Also, we will show the complaint copy when auto-drivers enquire about the complainant.”