TDR and Road widening move from BBMP in Bangalore

Some communities allow air rights to be transferred to the surrounding buildings For example, in a dense downtown area, there may be a building surrounded by skyscrapers. The building is only three stories high, but each building in the area has the right to thirty-five stories of airspace. The owners of the building could make a great deal of money by selling their building and allowing a thirty-five story office building to be built in its place.
To provide an incentive against this, the relevant authority (e.g. the municipal government) may choose to permit skyscraper developers to purchase the right to build a taller building by buying unused air rights from other property owners. In this case, a skyscraper developer may purchase the unused 32 stories of air rights from the owners of the historic building, giving them the right to build a skyscraper to a maximum height of 67 stories. This will allow the historic building owners to make almost as much money, if not more, without demolishing their building.
In case of lands where it is partly affected by the Master Plan / Detailed Development Plan proposals or by any other development listed in the Regulation no.1 in the Annexure XXI of the DR, Planning Permission for development / construction in the remaining part of the site shall be considered by the Member Secretary, CMDA (or the competent authority to whom powers have been delegated for issue of planning permission) only after the part of the land required for the project / scheme has been surrendered through a registered gift deed satisfying the regulations for the grant of TDR stated in the DR.
[ii](a) In other cases where a planning permission applications has not been received for any proposed development in a site as stated in (i) above, the Member Secretary, CMDA (or the local body concerned to whom power in this regard has been delegated) may publish a programme for road widening or a new road formation or implementation of any traffic and transportation infrastructure development or any urban infrastructure development granting TDR.
The recent move to build traffic free roads by BBMP which is a need of the hour to combat the traffic menance in bangalore or else there is a need for diversification of development to tier-2 and tier-3 cities.
The most vocal of the affected 40,000 have been lambasting the BBMP’s move meant to smoothen the flow of traffic in a very congested city. 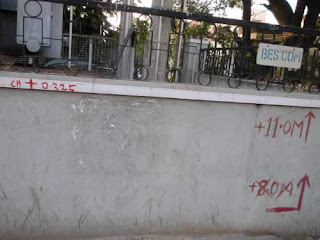 They can all breathe easy. No acquisition can be done without the owner’s consent, according to the current law, under transferable development rights (TDR). Simply put, if a person doesn’t want to give his/her property for road-widening, then he/she need not.
Right to Information (RTI) documents in possession with TOI have thrown up the surprising and hitherto well-hidden clause which states that properties can be acquired for road-widening only under TDR. The catch — which favours the home owners — comes in the next clause; TDR can be enforced only if the owner is willing. If he isn’t willing, the only option open to BBMP is to forcibly acquire the property by paying current market rates under the Karnataka Land Acquisition Act. A process that is very expensive, tedious and time-consuming and as such not a route preferred by BBMP to acquire land for road-widening.
The other plan will be  to forcibly take away land for road-widening. But that might come to naught.”If the BBMP has to compensate all the affected property owners, the Palike will incur Rs 10,000 crore expenditure which is virtually unaffordable for a corporation already reeling under financial crunch,
For the record, BBMP has already identified over 37,000 properties across the city of which 4,436 properties are in Central Business District. Realising that under TDR they cannot forcibly knock down properties,
The commissioner’s hope is that Bangaloreans will willingly part with their land for road-widening and the consequent infrastructure projects, keeping in mind the larger interests of the city.
Source: Part from Times of indi and other international website.
Share. Twitter Facebook Google+ Pinterest LinkedIn Tumblr Email