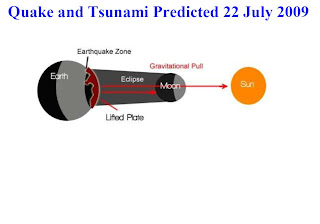 Published the message as received:

Hello there. I just wanted to let you know that please stay away from the beaches all around inthe month of July. There is a prediction that there will be another tsunami or earthquakehitting on 22 July 2009. It is also when there will be sun eclipse. Predicted that it is going to bereally bad and countries like Malaysia (Sabah & Sarawak), Singapore, Maldives, Australia,Mauritius, Sri Lanka, India, Indonesia, Philippines are going to be badly hit. Please try and stayaway from the beaches in July. Better to be safe than sorry. Please pass the word around.Please also pray for all beings.Quake and Tsunami Predicted 22 July 2009 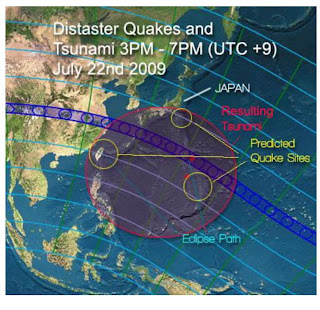 The eclipse quake theory is as follows, When the gravitational force of the sun and moon are both pulling on a plate that has not had series of recent earth quakes, the extra pull is all that is needed to “pop the seam” and cause a major quake. Japans tectonic plates 6+ Magnitude Quake on 22 July 2009 at 3:00 pm Local Japanese time. This will be follower by two level 5+ Earthquakes and a Tsunami between 5:00 pm and 7:00 pm. The tsunami will start out in the pacific ocean (to the South East of Japan … Along the fault line) and hit all the islands to the south west of Japan, Indonesia and even reach New Zealand. The major quakes will actually be along the fault lines in the Ocean.
The theory that the gravitational pull of the Sun and Moon pulling together will do the following things.
1. Lift the tectonic plates
2. Cause the tide to rise more than usual
3. Cause an underground molten magma tide to dip and raise the plates following the water tide.
Taken all the time data from the Nasa eclipse site into an excel spread sheet four the four tectonic plates in the region. Assumed an hour delay for each event following the lunar eclipse, and then summed the values. I assumed that the events would last longer for the fluids, water and molten magma than for dry land. And then summed the values four all 4 plates where Japan sits.
The blue path above shows the lunar path that will achieve the full solar eclipse at around 11:30 am to 12:30 pm. Red dots show where the solar eclipse will be full. The theory is based on gravitation pull and the earth’s tectonic plates A solar eclipse means that the moon is blocking the sun. The moon has enough gravitational pull to cause the tides other natural phenomena on earth. The sun has enough gravitational pull to keep the earth in orbit. The theory is that during a solar eclipse, the moon has the Sun’s added pull on the earth’s tectonic plates. When the
Sun and Moon are together on one side of the planet, they pull together and lift up the earth’s tectonic plate, just beneath the eclipse. This causes the plate to shift upward, and then an earth quake when the lifted plate gets the little extra push (lift) it needed to move over its neighboring plate. The theory may be hair brained, or it might actually have some pull to it. (pun intended) I’d like to do a simulator game to find out.
Quote: 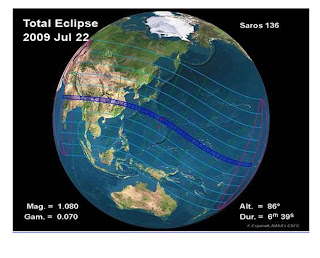 On Wednesday, 22 July 2009, a total eclipse of the Sun is visible from within a narrow corridor that traverses half of Earth. The path of the Moon’s umbral shadow begins in India and crosses through Nepal,Bangladesh, Bhutan, Myanmar and China. After leaving mainland Asia, the path crosses Japan’s Ryukyu Islands and curves southeast through the Pacific Ocean where the maximum duration of totality reaches 6 min 39 s. A partial eclipse is seen within the much broader path of the Moon’s penumbral shadow, which includes most of eastern Asia, Indonesia, and the Pacific Ocean.
Traders in stock market are advised utmost caution in dealing with shares as this may have severe impact on share market movement on either side.
Share. Twitter Facebook Google+ Pinterest LinkedIn Tumblr Email